The road was long and it seemed endless. We arrived late in the afternoon when the sun was almost set. I still could not have the hang of that bumpy road but somehow I gotta get used to it. I was nowhere to be called familiar because surrounding was nothing else than two long stripes of green. The grass field ran all the way from where we started to… actually I was not sure where it ended.

It took more than an hour from the gate to our campsite of that night. It was pitch black when we reached our destination but got the flash light on to build our tents. I had camped several times for the last few years but nothing was like it. We had no electricity besides the public kitchen space and public toilets, there was no connection on the phone either. That night was strange because you could not do much in such environment but I was happy to have found some ‘neighbours’ that we could talk the whole night about our adventurous safaris. What strange about it must be knowing that wild animals were around that you wouldn’t know if a lion could jump out of a bush at anytime. That funny feeling I got whenever I went to the toilet and definitely I was scared a bit.

Morning arrived and the sun shined through the thin tent’s curtain. Getting out of my small tent, I spotted a giraffe chilling on the side of the public kitchen having his breakfast. It was real, in front of my eyes, a living wild animal was just right beside me without any hesitation. He startled when I started coming closer and slower walked away. Then, I was ready for my last safari day.

Facts about Serengeti:
Located in Tanzania but runs to western Kenya, Serengeti is about 30,000 sqm and is one of the largest terrestrial mammal migration in the world.

Maybe after being on safaris to Manyara National Park and Ngorongoro Crater, it got quite tiring to sit in the jeep for another few hours being driven around. Serengeti is pretty much different from those two because it is an enormous green field, the surface is flat, and it is extremely big. It is said that it takes at least a week to explore the whole place. Unlike Manyara and Ngorongoro, Serengeti is quite rocky. On those rocks, that’s where you find loads of lions chilling around. Under the warm heat in the middle of the day, lions did not even feel bothered by tons of tourists surrounding them. They were still in their deep sleep. 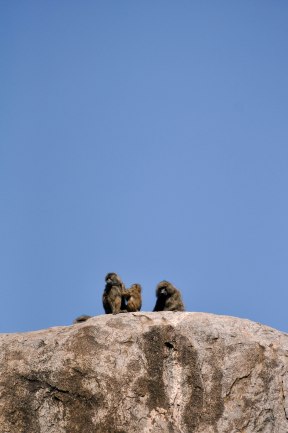 5 thoughts on “Tanzania: Serengeti National Park – Camp in the wild in the endless green park”