It was a weird ride from Cologne to the airport. Weeze Airport turns out to be in the middle of nowhere, surrounded by nothing than fields. I was so nervous on the way. It must be the idea of travelling alone for 2 weeks or it could be the fear of flight. Somehow, after a short nap in the bus, my mind was clearer. I imagined myself walking around Málaga, myself in the swimsuits bathing in the sun. It gave me peace.

It was raining when I left Germany. After 3 hour flight, here came the sun of Málaga. Arriving in Málaga and I already had a great impression on this city. Everything looks so wild and classic. The people, gotta say, super friendly. I had troubles finding my accommodation and when I asked on person in the bus, everyone joined in and helped me. What I could say was “sí sí gracias…” and had no idea what they were saying. 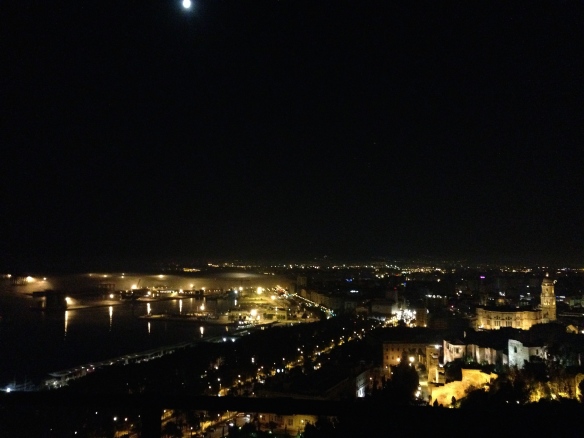 I’m staying in an Airbnb house. My host is amazing. Fali is such a nice guy. He welcomed me with his paella and vinos, and even walked with me in the city at night. 2 hour walk and I definitely knew that I was falling in love with this city. The city looked absolutely charming when the lights were on. I had a peak of the city view and I couldn’t say anything else instead of WOW.

I am so much looking forward to the coming days to see what other things Málaga could offer.